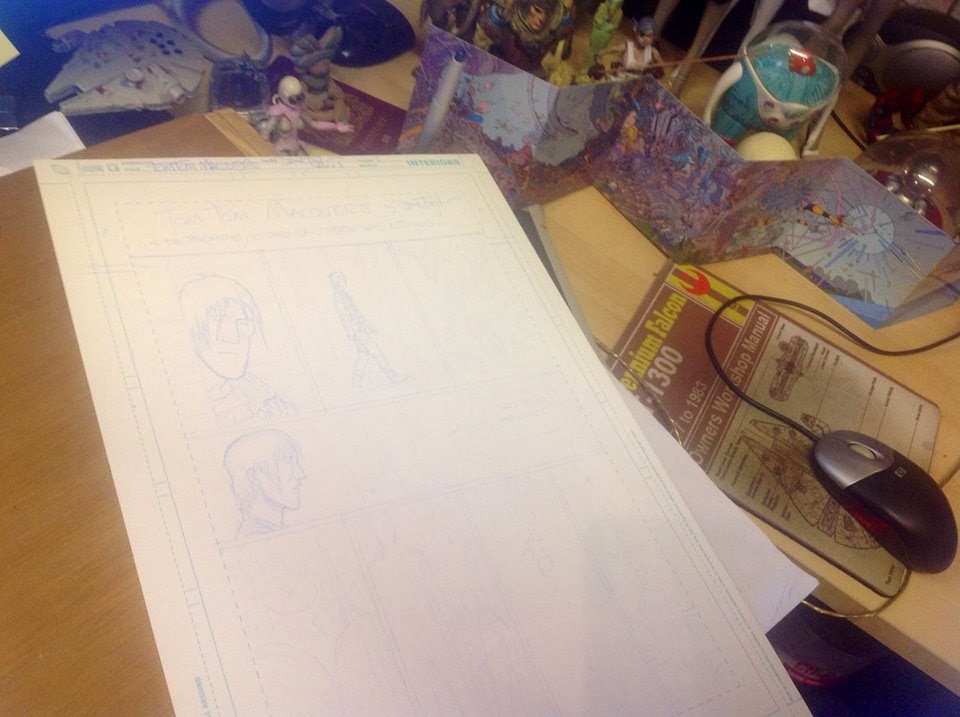 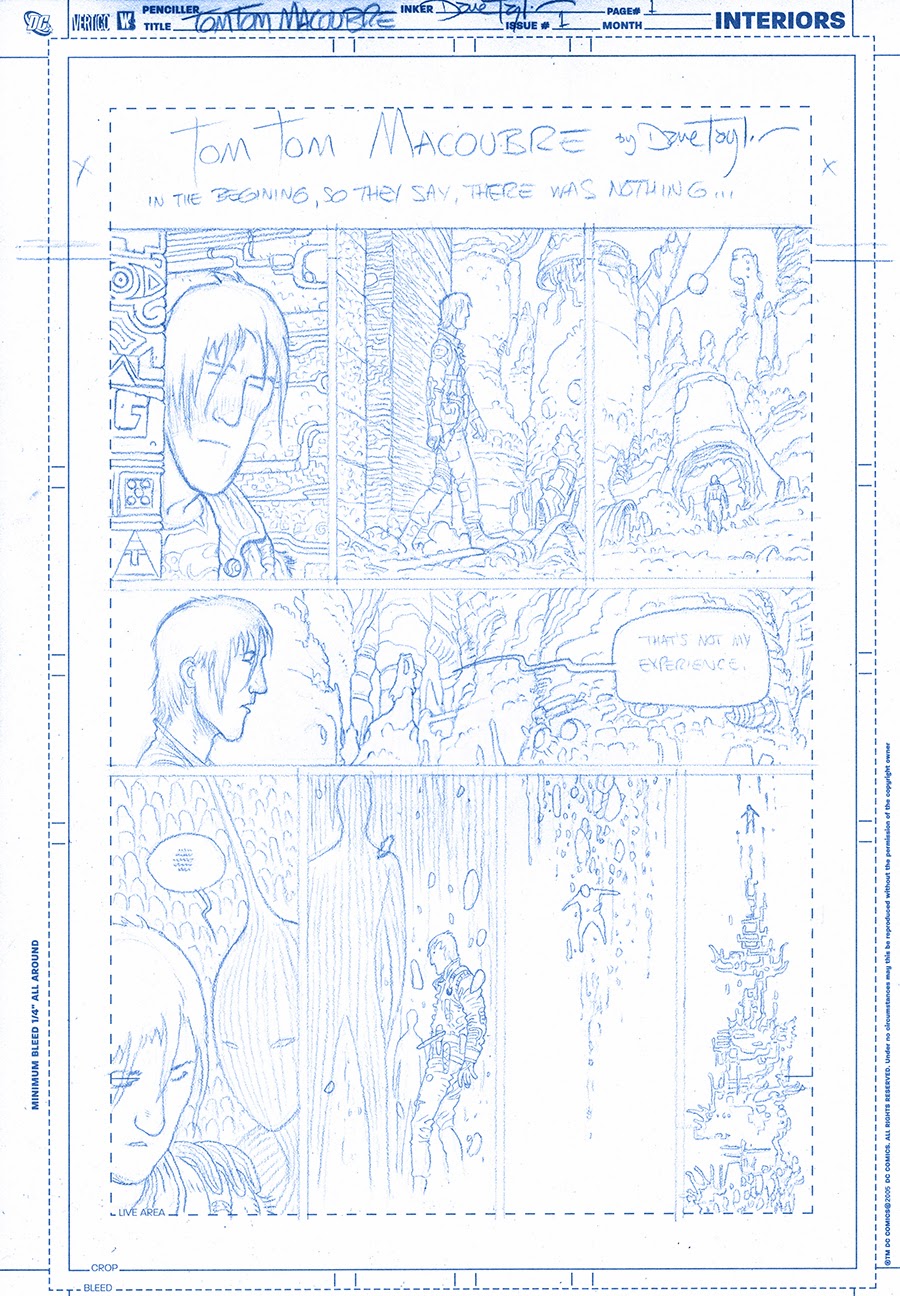 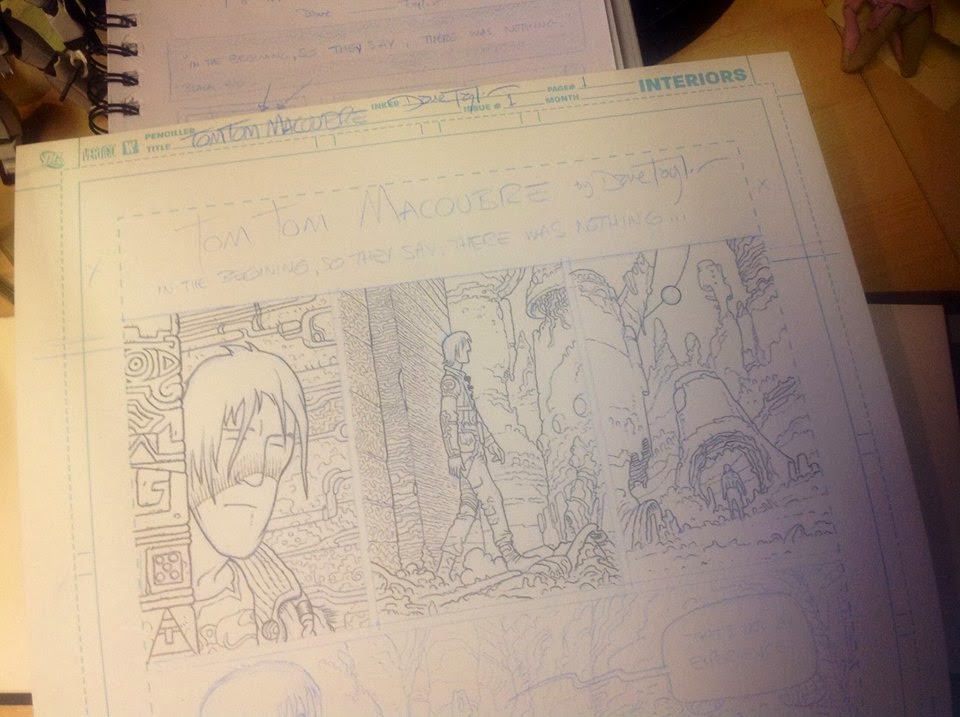 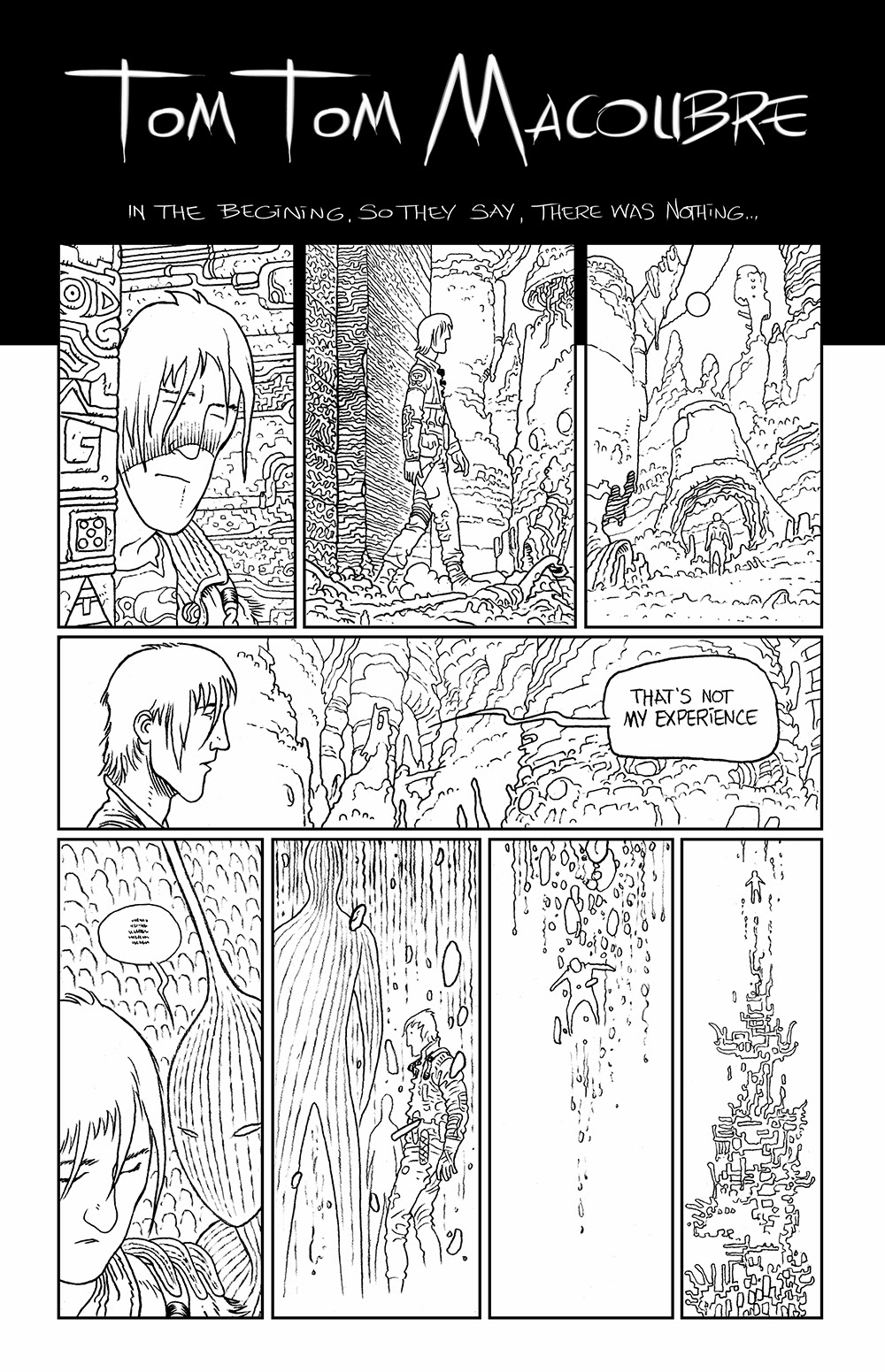 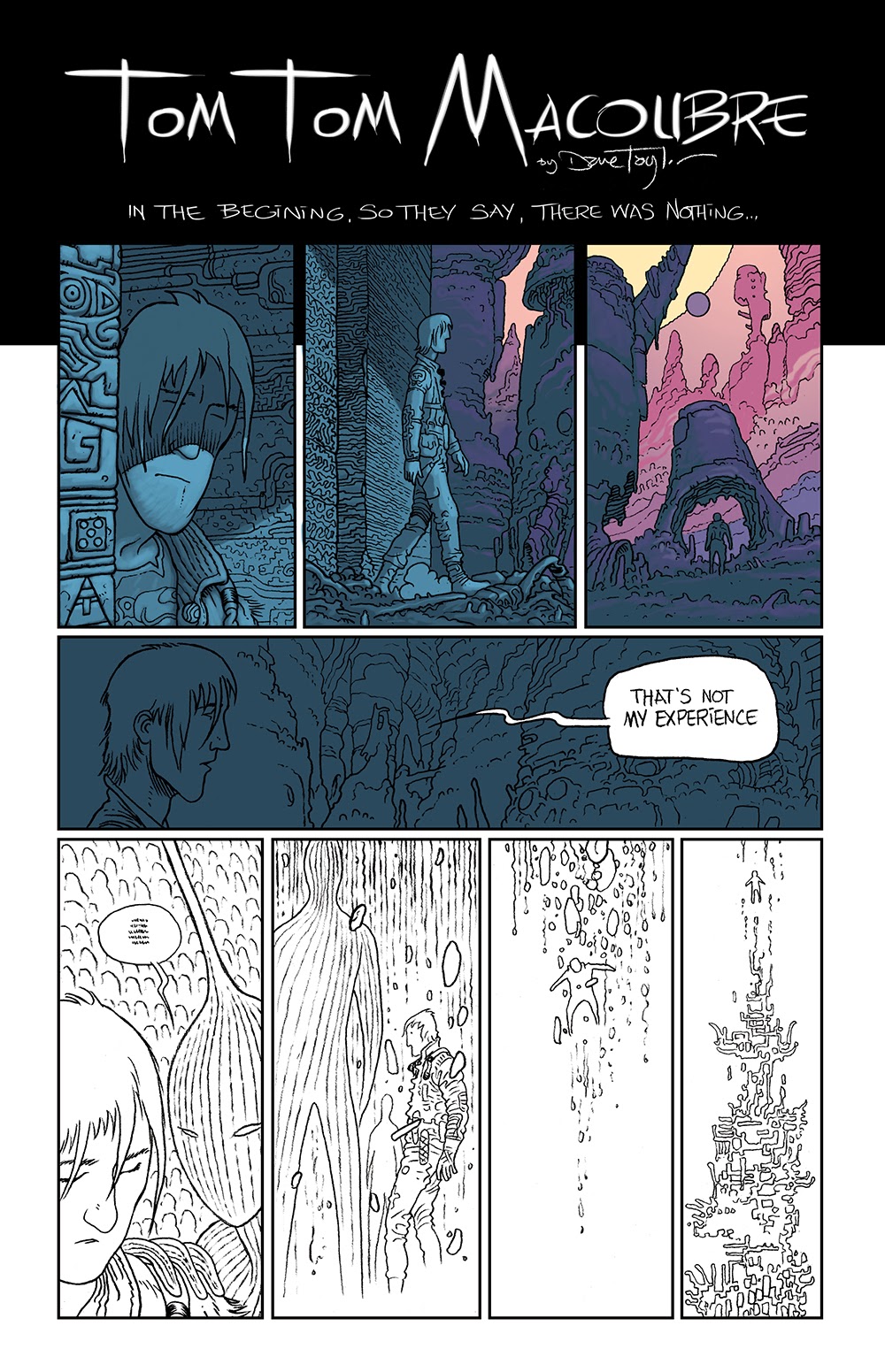 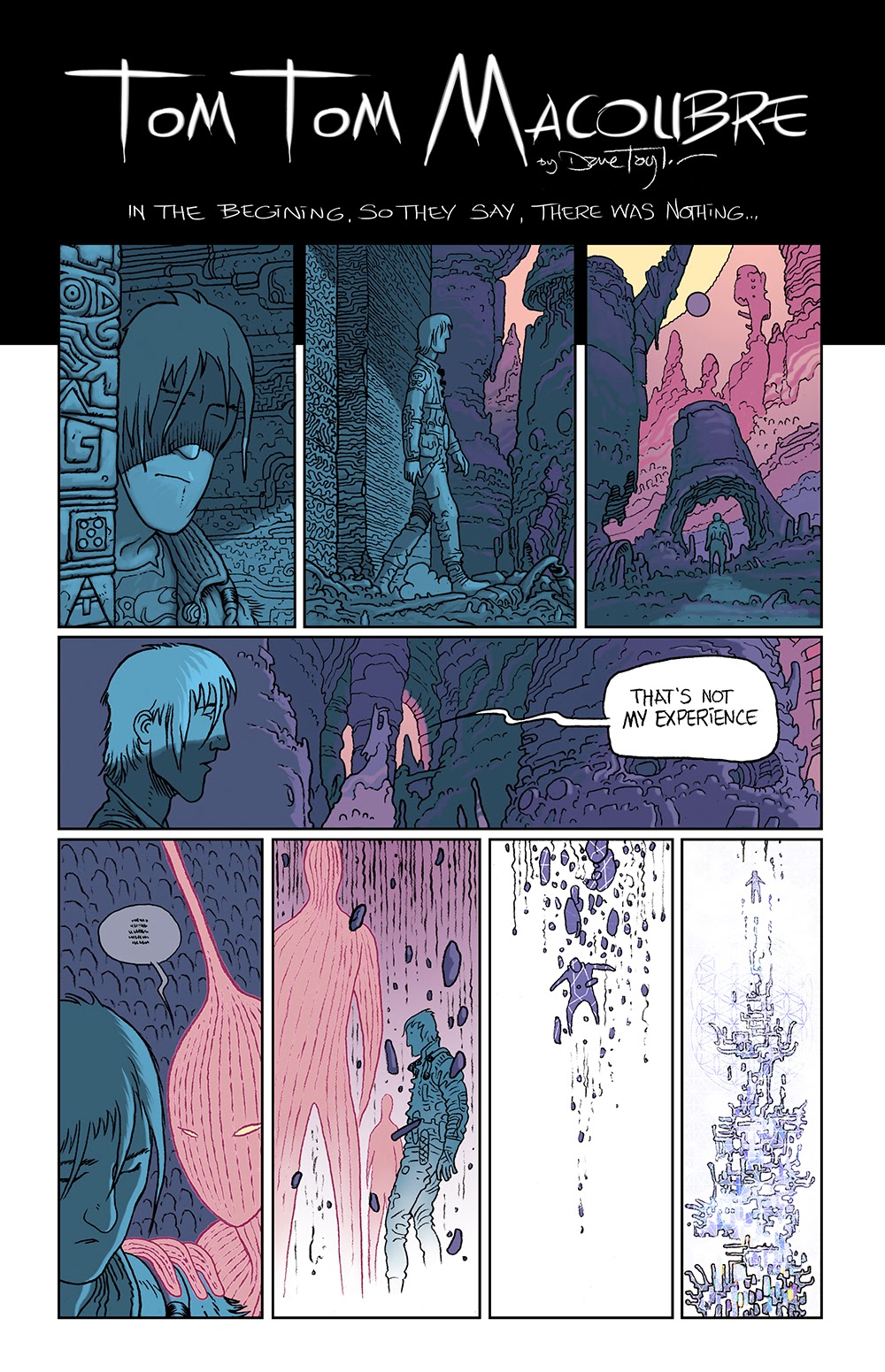 In 1987 I self published a 20 page comic called Tom Tom Macoubre (inspired by my love of Heavy Metal magazine and the works of Moebius, Bilal and Druillet) which, at the time, was meant to be over 100 pages. I couldn't afford to draw and publish such a big book so it was crushed down, squeezed into that little pamphlet, now dog eared and dusty. Many years later my pall Liam Sharp invited me to contribute to his anthology Event Horizon for which I produced a ten page gimps at what I then envisioned as my first huge graphic novel, re-telling Tom Tom's story. That book left me feeling that I HAD to one day sit down and write the epic tale but, as my career and life got in the way, it never happened. Last year I decided to finally gather my thoughts and ideas, my long festering plans, and get the damn thing written. After a few months of sporadic note making I found that I'd written the first 48 pages of what I then realized could be the first of at least 3 graphic novels. What I'm presenting here is a look at the first page, done as a sample to gain a publishing deal. Using the methods I've developed over the past year or so I first drew the page roughly using a blue pencil, then "inked" over that with a grade F graphite pencil, then, after scanning it into my computer and sharpening the line work I coloured it using photoshop.

The first step is taken.

After cracking on with my work on Judge Dredd I'm going to produce a few more sample pages and get them sent off with my written proposal, while keeping my fingers crossed that this highly esoteric, weird, downright bizarre story will find a home...at last.

WOW! I'd buy that!
BTW I really enjoyed your Batman Black and white story!

I came onto your blog while focusing just slightly submits. Nice strategy for next, I will be bookmarking at once seize your complete rises. web development with wordpress