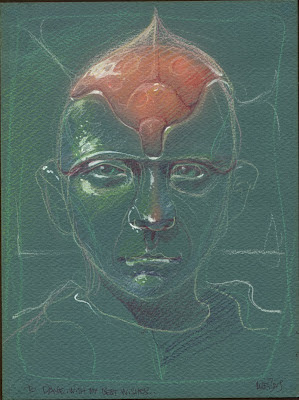 This morning I received the shocking news that Jean "Moebius" Giraud had died. He had been ill for some time, he passed on at his home in Paris.

I would like to express my deepest sympathy to his close friends and family.

I too feel as if I have lost a close family member. Those that know me know what this man meant to me. He was, at the beginning of my comic book career, my inspiration, my master and my guide. He continues to be all these things, he always will be.

The feeling of shock is heightened for me as it was only a few days ago that I was talking with an editor about contacting him. Jean and I had talked many years ago about working together on a graphic novel, I'd spent the intervening years being too terrified to approach him, as my editor agreed "He's too much of a Legend!" I never did send the letter I wrote, and re-wrote...and re-wrote. Despite his wonderful character and warmth I couldn't get past the uncontrollable fear of his status as a Legend.

Jean was, in a way, a father figure to me. I became aware of his work only a few years before my Father passed away. His work spoke to me as only a father can. He once told me that we were brothers. I guess this explains my mixed emotions right now. I've lost another Father and a brother all in one day.

His work will live on.

I too cannot understate how sad I feel at this news.

Especially as I embark on my own artistic path with his works as an inspiration, this news has really knocked me.

My annual obsession with going to Paris to look for mew Moebius works and prints will now feel so very different.

You are honoured to have worked with when you did and his work and legend lives on, in some form, in the hearts and minds of those that he has touched over the decades, yours more than many.

An mazing life and an amazing career. The gold standard any artist or creative person should aspire to. Thank god we had him and he produced so much amazing work.

it's been a thump to the heart for me too mate, my Buddha stuff would not be like it is without Moebius aka Jean's artistic genius and Crumb's zany genius mixed in my mind pool.
i feel i've lost an artistic uncle myself i've loved his work almost all my life, must meet soon to toast him in style
jon

I spent the weekend feeling like I'd been punched in the heart, Dave. I don't need to imagine your grief; I had a similar experience with my mentor, Don Lawrence. If it's any consolation, if you continue producing work as good as you do you'll be honouring Jean "Moebious Giraud's memory with every stroke of your pen. Your pal, Chris Weston.

You know, I thought of you when I heard the news, Dave. In much the same way you think of relatives when you hear news of a death.

He was a hero and an inspiration to me, but he was even more to you.

Like Col says though, thank God we had him!

Thanks guys. Your words mean a great deal, not just to me but to who ever reads them.