Life can be a magical experience. Life can surprise you and make you wonder if you're dreaming. Some of the magic in my own life was provided by Jean Moebius Giraud. As a form of tribute to my artistic Master and spiritual teacher I'd like to tell my own, personal story of Moebius.

I'd started art school in 1980 without too much of an idea of where I wanted to go with my art, or who to be. I'd drawn a few comics, for fun, with no intention of ever publishing them. They were crude and unfinished on the whole but they were fun and I knew that comic books might play a part in my future life, should I ever master the craft. One day, while out searching for lunch, I stumbled upon an old, dusty second hand book shop in which I discovered a pile of Metal Hurlant, the French for-runner of the Heavy Metal magazine. There I discovered "Moebius". I bought every issue in the shop and went straight home, dismissing art school as a waste of time that day. It was a shocking, mind blowing experience, thumbing through the pages, constantly being almost blinded by the art work I found. Here was a mysterious creature with an equally mysterious name who was capable of describing, in such beauty and masterly craftsmanship, a world so profound and vast that it left my head spinning. The cause of the shock to my system was the fact that someone had beaten me at a game I thought (innocently at the time) only I knew about. As a sixteen year old lad my imagination had started to mature a few years before, allowing me to start drawing my own, very personal universe in my first comics. A universe populated by beings of pure imagination and wonder. Strange dreamlike creatures that played by no rules but their own. Or so I thought. 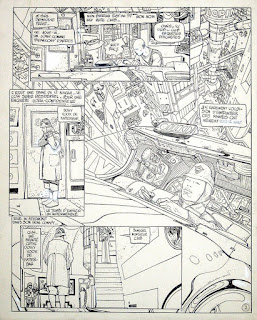 This had such an effect on me that for a few years I couldn't draw. Or at least I couldn't draw what I wanted to. Someone else was already doing that.


When my Father died I took a trip to France with a fellow band member, walked into a BD shop in Paris and found Jean's La Deviation, a large hard-back book, printed in black and white and featuring some of Jean's work as Moebius (at this stage I was blissfully unaware of the Blueberry series and Gir!!). Something snapped inside me. Something happened, some magic, that caused me to realise my goal in life. I was going to be a comic book artist!


The freedom that Jean expressed in La Deviation, and later books soon collected, profoundly (there's that word again) altered my thinking. I realised that you don't have to conform to what's expected of you. I found great peace in the realisation that I could allow my art to grow naturally over time and to slowly develop into the artist I so wanted to be. This was clearly a Revelation.

Moving forward a few years again, I find myself at a London comic convention talking to his then friend and agent Jean-Marc while I look, in a dream state, though Moebius' portfolio. Page after page of amazing, beautiful, astounding work. I asked Jean-Marc if it would be possible to get to show my own portfolio, embarrassingly hidden away at my feet, to the great artist, explaining what an effect his work had had on me recently. A few hours later I found myself sitting with Moebius while he excitedly looked though my work. I couldn't believe how interested he seemed, especially as I knew he was due to go out for lunch with another Master, namely Terry Gilliam (who kept peering around the door at us, pulling faces!!)! He seemed delighted to view my drawings, giggling at one stage when he spotted an obvious rip-off of one of his own drawings! As he was leaving I asked if there was any advise he could offer me. He said "go back to art school and study the classics. That's all you need." That's exactly what I did.

After working a few years for Marvel UK, Marvel and DC I felt confined, drawing in the house style I'd allowed myself to be pushed into and wanting more. I met up with Moebius again at another convention where I asked if it might be possible to work with him in some way. For some reason, unrealised at the time, I felt I needed to push myself in this direction. To stand at the precipice and to leap. My fear of his greatness energised me and I found myself asking to be a part of his creative endeavours. Next thing I know I'm working on Tongue Lash, an adult graphic novel for the French market written by Jean-Marc and his wife Randy. I was in heaven! The book had been inspired by a series of illustrations Jean had done and a conversation between Jean and Jean-Marc regarding the Maya. A year later Jean walks into his local BD store and finds my book, featured on the cover are two of his creations. Due, it seems, to some misunderstanding this caused Jean to feel invaded. I'd stolen his characters! I heard he was furious so immediately wrote an honest account of how the book came to be and how, from my point of view, it was a homage to him and his work. A few days later I received a phone call from the Master himself, apologising for the misunderstanding and wishing me and my book all the very best. I promptly started work on the second book, with his blessing.

Around this time I was due to be in Paris so called him at his home there. He welcomed me in with a huge bowl of tea and sat me down saying "could I show you what I've been working on?" He disappeared into his studio, which I was craning my neck to look into, and emerged like an embarrassed child clutching a half finished page of Blueberry. I took it. He stood away, looking to catch my thoughts as I looked over it. What struck me wasn't so much the beautifully crafted page of art, perfect and unique as it was, but the attitude he had. I was an equal, a fellow artist who's thoughts and impressions meant a great deal to him. I shrugged, smiled up at him and said "Beautiful!" to which his response was so humble and honest that the moment stayed with me to this day. 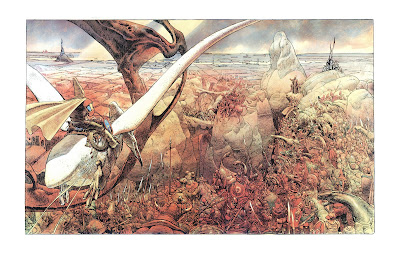 Again, a few years later I'm invited by Jean-Marc to contribute to his 'Moebius Comics' an Arzak story. In the 70's Jean had sketched many ideas for his silent, enigmatic character on little note pages that Jean-Marc had collected with the idea of handing them to fellow Moebius fans/artists to decipher in their own way, while paying homage to the creator. I tell him about the job while on the phone to him. He says "wouldn't it be fun for me to do one of your pages...not telling anyone! No one will know!" Obviously I thought him mad! As if nobody would spot the page in amongst my own! His child like sense of joy overwhelmed me and I agreed. (I've re-written this following episode as I'd got it slightly upside down when I first wrote it) A few weeks later I'm in Paris where, in a little street-side cafe, Le Rallye Dante, he gives me his page. As you can see in the image below it came as quite a shock! I'd already drawn the first few pages, following as closely as I could to his 1970's roughs, but now he'd changed the flow, the direction of the story, and with such a powerful and mind blowing stroke that I probably turned pale. (more on this story can be found here plus the full Arzak strip)

The affect of this page on me can not be explained. I'm not even sure that I've fully grasped the depth of meaning this has for me. It hangs on the wall in my studio and constantly reminds me that this life is but a dream. 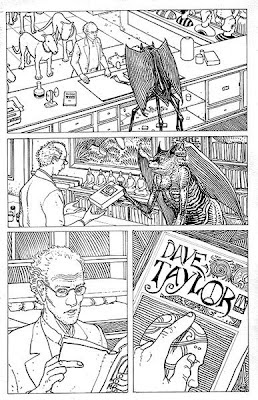 My last memory of Moebius was, as ever, a unique experience. While both in London he asked if I'd like to join him on a trip to see a Lord Leighton exhibition. There, I had the intense privilege of witnessing the depth of his character. As he walked about from one incredible painting to the next, his hands behind his back looking up at the masterly work, he looked to me as if he was allowing himself to be the student once more, to learn from this great master, with no thought of his own position as a fellow master of his art. And I think, on reflection, that that's what Jean taught me most of all. That where ever you are in life, no matter what you've experienced, there's always so much more wonder in the world that we can learn from and to wonder at.

Jean Moebius Giraud was profoundly unique as a man and as a creator. He will continue to teach us and the generations that come after us...for eternity 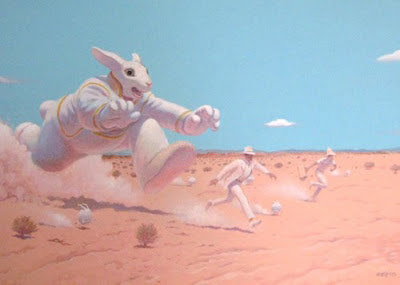 For me it was reading 'Upon a Star' in sixth form. It pretty much did for my A-Levels!

You were obviously true kindred spirits, thanks for sharing your thoughts Dave, this was my first port of call when I heard the sad news.

A sincere thanks for sharing your personal stories with an amazing creator....

Please note that I updated this a little, remembering more clearly about the Arzak page story and I've updated the link that now has all the pages from the strip including his original roughs.

That's a lovely tribute you did there Dave.
Well done.

I was looking for pages of Moebius and I got to your blog. Then I read this post. Beautiful and touching memories Dave.