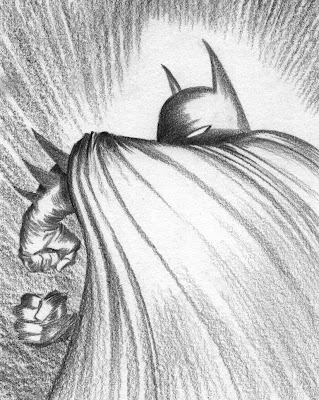 People of the Earth, Moon and the other inhabited local worlds...it's the time you've all been waiting for, the time when I finally get to announce my Batman book, officially!!
We've all had fun playing guessing games as to who this "mysterious writer" really is, at one point it crossed my mind to run a competition to see who could get closest, but now it's time to end all this silliness and just get on with disclosure.


Batman: Death by Design, art by me and written by Chip Kidd. To be published spring 2012 in "deluxe" format.


So there we have it folks! Now you know. And for those of you unfamiliar with Mr Kidd (shame on you!) allow me to introduce New York's very own graphic "rock star", the man responsible for changing the face of book cover design in the late 20th century and early 21st. He's considered the leading light in graphic design, you've all seen his work and wondered at it's appeal. And he can write! Man, can he write! With all honesty and conviction I can say that this Batman: Death by Design is the best Batman story I've read in thirty years. Fact. Personally, it has many connections with my own life experience. It features the theme of architecture which is part of my family history, so you could say I'm biased...I'm not. How dare you!
I can't wait for this book to be published because I genuinely think it's my best work. Thanks to Chip, I had to become a better artist. I had to grow, to find a new way of telling a story and ultimately to be the artist of my design. Thanks Chip!

Here's a link to Chip's CBR interview about the book.

I'll continue adding sneaky peeks from time to time so don't be a stranger!
Posted by D.TAYLOR at 12:37 PM

I can't wait to read this new Batman GN!! Who´s going to be the editor of this project? Will you do the color and lettering?

Love your work!
Greetings from spain!

Prisioner...My editor on this project is the great Mark Chiarello, I'm doing the colour and, in part, the lettering.

The best of luck in the project!!
The work is amazing as usual!!

about bloody time, bud .
glad it's been officially announced and looking forward to celebrating with you a wee beer or two soon cheers jon

Really exciting news Dave.
I'm a big fan of Chip Kidd. Love the idea of a classic, old school adventuring Batman. Especially can't wait to see you throwing Batman all over a lovingly rendered cityscape. Seems you and Chip are both really playing to your strengths. Can't wait!

Really looking forward to this Dave, should make up for our lack of "moon" adventures. I'll be buying two copies, one to store and one to read! All the best - J :)

Jay...we'll work on something cool one of these days!!