As some of you may know, recently retired police detective Gary Heseltine and I have been working on a proposal for a film and TV series concerned with the famous (but not famous enough!) Rendlesham Forest UFO incident that took place in 1980. Gary has also been busy producing an on-line magazine, the UFO Truth Magazine, in which can be found articles regarding all manner of things concerning UFO's and related topics. He's asked me to advertise the first UFO Truth conference here on my blog, and as I'm a contributor to the mag and supporter of his work, which also includes his web site Prufos which is an on-line police database for working and retired police officers to report sightings, I was more than happy to oblige. For info please contact Gary here... heseltinegary@hotmail.com

As a witness to the UFO phenomenon and firm believer that we, the public, have a rite to know the truth about the world we share, I'm prepared to stand up and take the inevitable flack that comes with such talk. There are those of you that will have already ether stopped reading this or have thought "what a nutter!". Fair enough. And then there are those of you who share a vague interest in the subject, knowing that it's not too much of a stretch of the imagination to consider that, in this seemingly ever expanding universe, we surely can not be alone. Then there are those, like myself and a staggering amount of folk world wide, that share a keen interest and know that this is a hugely important subject that has far reaching consequences for us all. If you're in the last two groups then I'd like you to think about attending the conference, which I know from experience, will be well worth the effort and cost.

To those of you still reading who say "but where's the proof?" I'll say this...that's a fair question. The answer is not an easy one, it's difficult and frustrating when searching the net because this subject is mired in illusion, misinfo, disinfo and aggressive debunking, not to mention the ridicule. Consider this...why, when ridicule is the reward, thousands of highly respected, highly trained, sensible people all over the planet are willing to stand up and openly report seeing disc-like objects, flying causers, cigar shaped craft, and all manner of unusual and unidentified objects on a daily basis? Why does that happen? What's the point if it's all fictional? The answer to that question is...for the truth to be told about something that could, if finally admitted to by the worlds leaders, change all our lives for the better.

Finally, to answer the question "if all this is true then what's it all about? What IS the point?" The point is that our planet is one of possibly millions of planets that supports life, and here on this particular planet our leaders are hell bent on destroying it and each other, along with all of us. If there are intelligent life forms "out there" who have the ability to journey across the cosmos, societies possibly thousands of years older than us, thousands of years in advance of us, don't you think they'd take an interest? Don't you think they'd be concerned? Don't you think they'd attempt to do something about the problem "we've" created? Our media has bombarded us with tales of invading aliens, big ugly creatures insistent on eating our brains. For more than half a century we've been soaking this stuff up to the point where we might think that if "aliens" really do exist then they are probably very nasty and not good for us at all! I personally don't believe a word of it. I certainly am not putting forward the notion that we should all relax and accept "aliens" are all jolly decent folk, but what I do believe is that we should approach the subject carefully and with an open mind, free of the "all aliens are evil" propaganda. For our children's sake, our future, isn't it best we grow up and face our problems intelligently, with honesty, clarity and respect? I invite you to leave your comments, thanks. 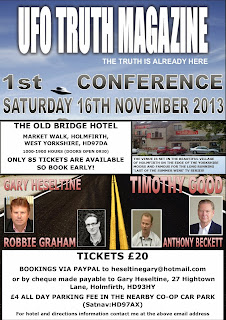 Back in the late 1970's on the way back from a school fair with my Mam and my Brother we happened upon a small crowd of people who's already gathered on a corner not far from our house, they were watching something in the sky, it was like a series of strip lights of different colours that were arcing side to side in the sky like they were on a piece of string that someone was swinging an object on, no noise, no movement besides the swinging, eventually after what may have been 10 mins, we gave up watching and simply went home. It sure wasn't a plane or helicopter, not in a fixed position for that length of time, so I'm sure it was a UFO !!!!??

Thanks for your disclosure Andrew!
I've no idea what it was you saw, a very rare sighting for sure as I've not heard of anything quite like that. I wonder if it made it into the papers, with that many witnesses?

I think my Mother checked the papers for the next few days but nobody seemed to write in about it !! It was very weird indeed and has always stuck in my mind !!!

It seems impossible to forget seeing something like that. I can still remember my big sighting as if it were last night.
It's no surprise the papers may not have covered it, only a small percentage of folk would bother to report an experience of that sort. It can seem like a very personal experience and not one, naturally, that you want to talk a lot about with strangers.

I was very pleased to find this site.I wanted to thank you for this great read!! I definitely enjoying every little bit of it and I have you bookmarked to check out new stuff you post.